One of the First Programmable Table Tennis Robots: Breakthrough of the 90s 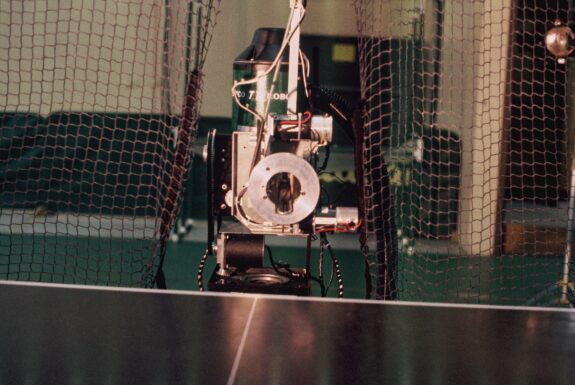 Working on TenniRobo, we often communicate with many extraordinary people who are happy to share their knowledge. Quite recently, we were lucky to get to know a very interesting person, whose story may impress you as well. So we’d like to share it in this blog, and maybe get some comments.

All the events, which will soon turn 30 yrs. old, take us back to the origins of modern table tennis robots. In 1992, Waqidi Falicoff was one of two principal investigators on the Programmable Table Tennis Robot development project under the working name T92-004-A-TT. 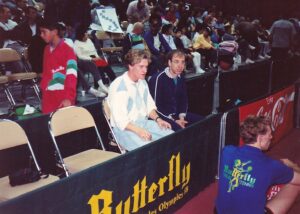 One of the major goals was to help prepare US players for the 1992 Olympic Games and beyond. But the engineers only had around five months to complete the project. So, their approach was to put on the most powerful servo, etc., and when this added too much mass for the other components (servos, steppers, etc.) to handle the loads, to upgrade those. Eventually, they came to a stable configuration. 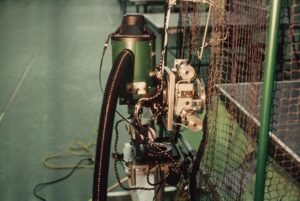 The quality of the ball feed mechanism is critical. For the ’92 robot, engineers used a modified version of the mechanism used for the older SITCO robots, which were mature products. 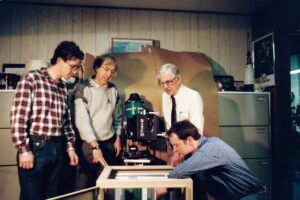 Another thing which they also dealt with is being able to replicate the duration between shots in table tennis. As a result of their painstaking work, they were able to handle more than 150 balls per minute. But the shortest time they could achieve between any two types of shots was around 0.5 secs. 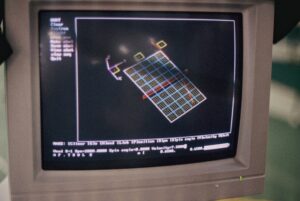 It should be noted that the 1992 PC-controlled table tennis robot compares quite well to recent commercially available tt robots. In fact, some of its features are still not available, such as a color 3D interface that showed the flight of the balls for most types of shots. 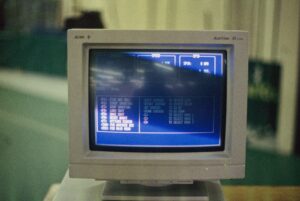 A trajectory prediction algorithm was developed which included studies done by NASA Ames Research Center and other aerodynamic researchers. One of the discoveries on this project from these studies was the so-called “Reverse Magnus” force, which is a force that is opposite to the well-known Magnus force (responsible for curving the ball in the air).

This little-known force occurs only for specific spin/speed ratios. The Reverse Magnus force was thought to be responsible for the sudden drop of a ball for some backspin shots towards the end of its flight. In order to take into account all changes in the trajectory, the robot had a global adjustment for the elevation of the site (sea level, etc.) 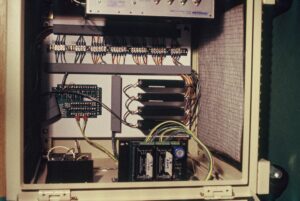 The system had unlimited shots and sequences only limited by the hard disk size of the ACER 486 computer. The software was designed to handle up to 3 heads which could be located as desired (on a common elevated platform). However, only one head was produced due to time constraints.

A recycling system was used which consisted of a net for catching balls and a pneumatic tube mechanism that returned the balls to the throwing head ball hopper. 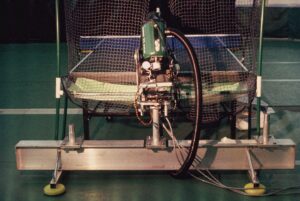 As an assistant coach for the US Men’s 92′ Olympic Team, Waqidi Falicoff used the invention to train two players, Sean O’Neill and Jimmy Butler, for the upcoming competition. 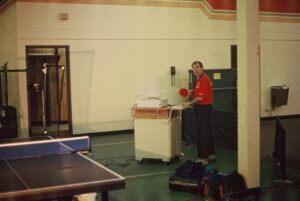 The final version of the table tennis robot was delivered to the East Coast training facilities in Virginia for the Olympic Table Tennis Team on June 16, 1992. It was successfully used both for training and a large number of exhibitions at the Virginia site and in the Olympic Send-Off Village at Busch Gardens in Tampa, Florida.

The robot was shown on regional and national television and was mentioned in every major newspaper on the East coast. In addition, there were articles in numerous magazines, including Time, Omni, and Sports Illustrated.

Virtually all of the goals for the project were achieved. Even though there was only a short period of time that the robot was available for use by the team prior to the Olympics in Barcelona, a number of the players believe that the robot did help in their preparation. 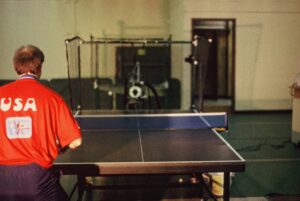 One special sequence of shots was developed to prepare for play against Yoo Nam-Kyu of South Korea (the 1988 Olympic Gold medalist). Sean O’Neill (later was the High-Performance Director of the USATT) nearly beat him at the ‘92 Games, which he attributes to his training using the robot and being his teammate in Sweden.

Despite the fact that the first attempts to create a viable programmable table tennis robot happened in the early 90s, improvements to that PC-based robot have proceeded at a slow pace. The efforts of most companies in the market have been more focused on achieving wireless connections and reliability while reducing costs and weight (the 92’ tt robot and related hardware weighed over 300kg). We in TenniRobo are ready to turn the tide, take the baton from early inventors and make another breakthrough.